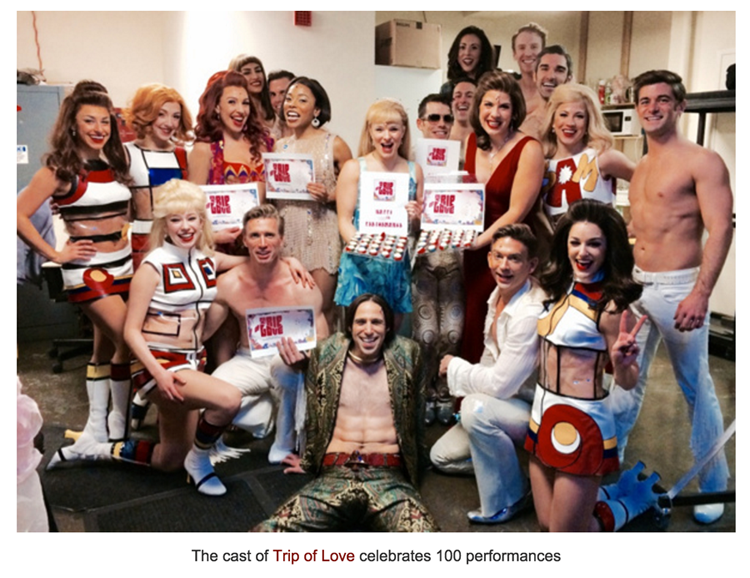 TRIP OF LOVE, the dance musical spectacle celebrating the biggest hits of the ’60s, is proud to have celebrated 100 performances this Wednesday, January 13, 2016. Following the matinee performance, the company celebrated the milestone with tie-dye cupcakes to match the show’s ’60s style. TRIP OF LOVE began performances Saturday, September 26 at Stage 42, formerly The Little Shubert Theater (422 West 42nd St) and officially opened on Sunday, October 18, 2015. Scroll down for photos!

“We’re so happy to celebrate 100 performances of TRIP OF LOVE with our wonderful audiences, who continue to come back to sing and dance with us again and again – including one audience member who has seen us 16 times!” said producer Makoto Deguchi. “We can’t wait to continue celebrating the 1960s here in New York City.”

American pop culture is still pulsing with the psychedelic energy of the Sixties, an era of expression and revolution around the world. The music told the story then and it will again this fall as TRIP OF LOVE brings the decade to life with 28 of the biggest hits of the ’60s, including “Blowin’ In The Wind,” “Born To Be Wild,” “California Dreamin’,” “I Saw Her Standing There,” “These Boots Are Made For Walkin’,” “White Rabbit,” “You Don’t Own Me” and many more.

TRIP OF LOVE is directed and choreographed by James Walski (Saturday Night Fever, Starlight Express) and features scenic design by Tony Award winner Robin Wagner (The Producers, Dreamgirls), and costume design by Tony Award winner Gregg Barnes (Aladdin, Kinky Boots).TRIP OF LOVE is produced by Makoto Deguchi (Blue Man Group: Tubes), and had its world premiere in April of 2008 at the Theatre Brava! in Osaka, Japan.